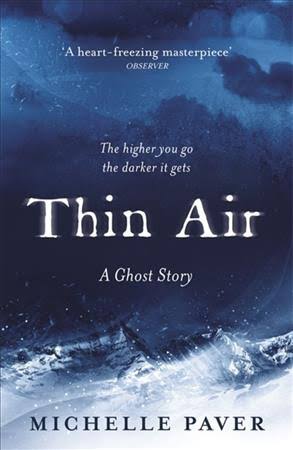 Deep in the Himalayas, lies Kangchenjunga, or Five Peaks.  It’s one of the deadliest mountains in the world, and Stephen Pearce is at renowned mountaineer Charles Tennant’s house in 1935 on the eve of setting out on an expedition to scale its south peak.

Stumbling by accident into Tennant’s quarters, Stephen has a deeply unsettling encounter with the mountaineer and feels, without knowing quite why, that the expedition is wrong and ill-fated.

As the trek progresses, Stephen’s feeling of unease increases and he wonders if the truth had been told about Tennant’s previous expedition of 1905.

Even if you’re not a mountaineer, this novel will grip you in an ice-cold vice.  Michelle Paver ramps up the suspense and the uncertainty that Stephen feels.  He’s the odd one out in a group led by his gung-ho brother Kits, and sibling rivalry looms large over this tale.  Set mainly in 1935, the casual racism is of its time and members of the party who are not ‘quite quite’ are subtly and not-so subtly excluded.

This is a breathtaking, heart-in-your-mouth read.  The pull of the mountain is strong, and what lies on it exerts an inescapable and malevolent hold over Stephen.  The question is, will he make it off the mountain alive?